I am so excited for tonight’s episode of Psych! All the clips look amazing; specially the one posted this morning with Gus, Lassie and Henry at a club! Omg, lol! And this time it is Timothy Omundson on the character chatter, which I will also look forward to. I don’t have any questions for him myself, I figure I have tweeted him once about Marlowe and I tried asking Tim Meltreger about it too, and no answer, so either they just never saw the question or its something under wraps, so I won’t be annoying and ask again. Just have to wait and see, also I mean I still have time before the chatter so maybe I will think of something between now and then.
The only thing that is sad is it’s the last new episode for awhile. I don’t know when Psych will return, but I am sure, or at least I hope it mentions it at the end of the episode tonight, so that I can mark my calendar and count the days till its return. But, its okay, I can re-watch old episodes, and I am also in the middle of re-watching Red Dwarf which is keeping me amused. Love for Rimmer! Don’t worry Rimmer I would be willing to snog you, if I ever met you. And I also need to watch more of Castle, I am only partway through the first season. It’s pretty good, I mean Nathan Fillion, of course it’s good. Which Castle is still giving me the urge to re-watch firefly, which I may have to do after I finish re-watching Red Dwarf.
Also question to my readers, I do have 105 views last I saw, I don’t know if you are returning readers, or if they were all single views, but here is my question, do you want a ‘About me’ page on here? With a more detailed info on moi? Just curious. Not sure if I should or not, most sites usually have an About page and such, so just asking.
Anyways, I think that’s all for the rambling, at least for the moment, after the story I do tend to ramble on some more, so we shall see, and about that…I need to find something to put for today’s story. I would have made a post last night, but the story I had started just wasn’t working out. It kept trying to go in an awkward direction that I just didn’t like. It starts out okay, and I sort of know what I want the end to be. It’s the middle that’s being a little pain in my ass. It’s still early, so I am going to work on that, go eat, work on it some more and hopefully it will be acceptable before Psych is on. 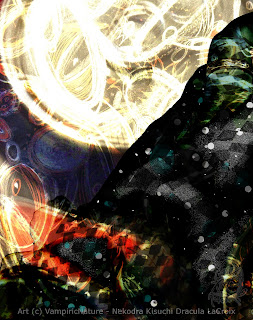 To Hell with it
By Nekodra K.D. LaCroix

So this story ended up longer then I was expecting it, so I am going to break it up into 3 maybe 4 parts. The beginning is now finished, the end is mostly worked out and much of it is typed, and the middle is still giving me a little trouble, but I know where I want this story to go, and I know some key things that I want to happen. I just need to work out the middle a little more, which is why I am also breaking this up in parts. I don’t know if I will have part 2 finished tomorrow or not, but I will be working on I some more later tonight, after Psych and the character chatter, and I will work on it tomorrow and post it as soon as I have it worked out well enough.
Though its getting close to Psych and character chatter time, which is making it hard to concentrate on this anymore for now. >.>So I am going to take a break, watch some Red Dwarf until Psych is on.
Yay for it being Wednesday, and also the 14th, which is a good number, twice as good as 7, so that must mean today will be good. Well yeah, so far it has, I got Korean BBQ for breakfast/lunch, and the story I started yesterday that I was unsure about is actually turning out quite well and I wonder if I can polish it enough to submit to some short story magazine or something, somewhere? Also the two clips I saw today for tonight’s episode of Psych have me so anxious for it to be on, tonight’s episode looks amazing and it looks like it has a good dose of Henry, which makes me happy. Yay!
Today is a great day, and I am going to enjoy it happily, and relish in my current good mood and high inspirations, if I can keep rolling with this positive mindset, then everything that has been crappy for the last few months will get better. But for now, some Red Dwarf till Psych. Yes! Goodgood times!
So the side notes, and that I am up, up and away to lovely sci-fi humor, I <3 you Rimmer, you’re the best:
-Follow me on Twitter, because I will tweet every time I post on my blog and I will post a link.  Nekodra's Twitter and remember Sharing is Caring, retweet to your friends if they might enjoy this.
-Have fun and toss me writing prompt, I would love the practice. I will credit you for tossing the prompt when I post the resulting story.
-If you have never seen Psych, and you love comedies or crime shows, I highly recommend it! You will laugh so much. Psych airs tonight on USA. YAY <3
-Also if you have never seen Red Dwarf it’s a great British Sci-fi comedy, and a new season after many years will air September 2012 for Red Dwarf X.
- Please remember feedback, I can’t grow as a writer from silence.
-Also remember unless stated otherwise, these stories and drawings belong to me, I wrote/drew them, please respect that.
~Nekodra K.D. LaCroix 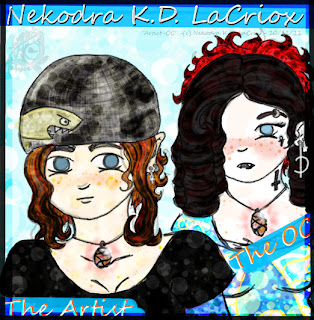 Posted by NekodraKDLaCroix at 6:06 PM