Beyond the Stars excited

So excited about new Red Dwarf! <3

I just read this wonderful article from someone who was at the first shooting for Red Dwarf X and as excited for the airing of the new season it made me. I have to say what pleasantly caught me off guard and super ecstatic was that there is planned already for another season! "This isn't just a one off return season for a last huraah, it's what hoping to be a kick off to another run!!" -that was more or least a quote from the article, then my own words, though I am not sure if I quoted it exact of not, so I just want to state that, but that is my excited tone behind the words.


All I have else to say is, I beg of you, as tempting as it maybe to spoil and as curious I am to hear about each episode, for those who are so lucky enough to be at a shooting, don't you dare, dare breath one toe out of line about the show, because if there are spoilers you will ruin the chance of there being another season. *grins* Threat aside now, I wish I was able to go to a shooting, but alas I am jobless and in America...even if I had won a ticket through the twitter contests, which would be very unlikely, I would have no way of getting to the studios. I don't know where it's shooting, I just assume England somewhere. ^_^;;


Here is a Link to this wondrous article, that is completely spoiler free, while delightfully making you long for it to be September 2012 already, I will say as I often will say when feeling inpatient about an upcoming event; where is the TARDIS when you need one?! After a quick snog with 10th Doctor, I would want to make stops for the rest of Psych season 6, but first I want to skip ahead, watch the fist episode for Red Dwarf X, then make a U-turn for the second half if Psych season 6, pop back for the second episode of Red Dwarf, followed by the promised Musical episode for the opening of Psych season 7. There are too many things I am looking forward to and they are almost a year away! I don't know how I will handle the wait, not only that, but the second half of Psych season 6 is over two months away, and two month feels too long, so how will I manage the 9 months till September?


That aside, I hope you didn't miss me too much the last few days. At least it feels like several days *Checks date for last post* Yup, several days....my sleep schedule is horribly wonky, but I may have fixed it, but I only woke up at 7am this morning because of horrible back pain...I need to find some pain relief, this bath isn't helping much, a little but not enough, now that the shock distracting excitement has worn down, I am now feeling the pain again.


Also I just wasn't in a talkative mood. I did work a little on "To Hell with it" and I did write a WOTDS (Words of the Day Stories) yesterday, but it was off, didn't include Nekodra or Vampires and I just didn't find it suitable to post. I have all day, so I will go find those pain relievers, maybe go back to sleep for a little while, then I will poke at seeing about writing today's WOTDS and working some more on "To Hell with it" though honestly I am feel the urge to work on "The Dreams we Weave", which is on of the novels I am working on. But at the same time I have been working on it in my head, and it wants to re-write several things and take a different turn the I have it currently going, so at the same time, I am a little peeved at it. So we will see where inspiration takes me today, but I will at least attempt a suitable WOTDS to post.


So while you begin reading the rest immediately, there is actually likely to be a hefty break here. I will insert the hours number for amusement later when I come back to this. It could be many, because I might be heading home for the holidays tonight, but it could be tomorrow. Anyways, to the mid-post break:
.............9 hrs and 40 minutes later, after a good nap from 9am to 1:30pm, and not heading home yet, that will be tomorrow, I am back with today's WOTDS and working on edits and the Afterword for this post. Enjoy. 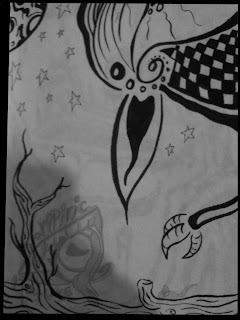 Note: to learn a little about Nekodra (The Oc) before reading a short story on her please take a look a the page titled WOTDS Guide, give you an idea what the WOTDS is and about Nekodra the character who stars in my WOTDS. Link to the WOTDS Guide

WOTDS December 19, 2011
(Note: they will be missing any special markings above letters because I don’t know how to add them, heh. Sorry. Also some I can’t type the word, but I will give the language and definition.)
Ethereal- Of or relating to the heaven: heavenly. Being light and airy: delicate.
Ectype- A reproduction; copy.
Venatic- of, like, or pertaining to hunting
Failing- A flaw or weak point
Veritas (Latin)- Truth
(Arabic)- Lesson
Souchou (Japanese)- Early morning


Lol, this was fun. I toyed with the idea of it being a bunny and her mistakenly spilling its fluffy insides, but then I decided naw, she will be unsure and end up not attacking it, then having her take a short break, and then it hit me. How funny would it be for the deer to just end up walking up to her and stealing a berry? Answer hilarious! I rather like the outcome of this story, its fun and what I hope was an unexpected ending.


So I have decided in honor, of the WOTDS with the 14 words and how fun it was to try to get so many words to fit into one story, that from now on I will do 7 words per story. While 14 its twice as good as 7, 7 its a bit better to work with, because some days have crappy words to work with, and then between the 12 apps for words of the day, it gives a decent range to pick from, while still having to use most of them.


But yeah, that was fun, I hope you found it amusing too. And this story is diffidently cannon to the world of Dreaming Reality (Which is the novel I am working on that Nekodra is from.) Though later on in the series that will be Dreaming Reality, but cannon none the less. And I like this, doing these WOTDS and having them involve Nekodra I think is going to help me get more done with that novel. It gives me little one shots that I can plug into the story line. *Claps* This makes me really happy. Dreaming Reality is my little pride and joy, that really hasn't been written at all, but I want to, and I mean to, but I never end up doing it, and this is at least getting stuff written down and it makes me soooo happy. *bounces excitedly* Super Happy! in fact I makes me want to work on the beginnings of Dreaming Reality. See this little shot of a story would take place....oh roughly 7 or so years from where the story will start.


So I hope you enjoyed that, I am off to work on the beginnings of Dreaming Reality, see you next post. Here are the side notes and then I am off:


-Follow me on Twitter, because I will tweet every time I post on my blog and I will post a link.  Nekodra's Twitter and remember Sharing is Caring, retweet to your friends if they might enjoy this.
-If you have never seen Psych, and you love comedies or crime shows, I highly recommend it! You will laugh so much. Psych Wednesday nights, but currently they are on a mid-season break and will return on Leap year, Feb. 29th 2012. So excited here is a Link to a trailer for the second half of season 6.
-Also if you have never seen Red Dwarf it’s a great British Sci-fi comedy, and a new season after many years will air September 2012 for Red Dwarf X. So excited they are currently filming, can’t wait!
- Please remember feedback, I can’t grow as a writer from silence.
-Also remember unless stated otherwise, these stories and drawings belong to me, I wrote/drew them, please respect that. 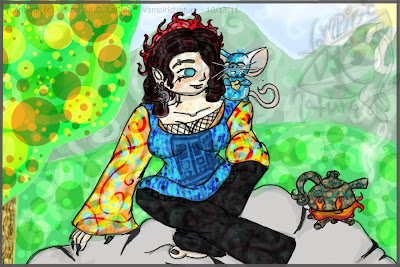 Posted by NekodraKDLaCroix at 8:04 AM