Yay, for new found inspiration and hopefully what is a realistic new years goal set in mind.

First I want to say hello, to the two followers I gained the other day! I am glad you appeared to like my blog enough to follow and I hope you won't be too shy and perhaps comment ^_~


So reading a few other fellow writer's blog, apparently you can self publish ebooks somehow, so I will have to research into that. But I don't have anything polished enough to even consider it right now, so that is just a tidbit that I will file away for when I do have something ready.This makes me excited! One because I have been worried that I would have to make drastic changes to my stories to please said publisher or that no publisher would want to pick up any of my stories. But now, somehow I can bypass that, wOOt! Makes me want to work on my novels more. So even though its not quite new years, but it damn near close enough, I have made my new years resolution and I have already started it with new found inspiration and vigor.


I have currently 7 novels/novellas (the end resulting length for these stories are unknown right now) though 2 of those I want to become a series, 1 for sure is, that is Dreaming Reality. That story has been bouncing around in my head for the past 8 years, there is so much to this idea it has to be a series. No ifs, ands, or buts. Dreaming Reality will be a series, a rather long series, most-likely. I don't expect to finish that one anytime soon, but using WOTDS I am at least working on it piece by piece, and so long as something is being written for it, then that is all that matters right now. Dreaming Reality is my precious baby, and I don't care how long it takes, I would almost be fine if I never truly finish it, and its merely published because I died and I am not there to say, but its not ready yet! And it's some epic long series that's expansive like the Britannica reference book series...thingy...>.>...that I recall schools always having in the library, and I think that's what is called......heh..


Then I have what is currently dubbed as Of the Deep End, which is my hand at a Vampire crime series. Hey, two of my top favorite shows are Forever Knight and Psych; Though Castle is likely to make it to that list, but its too early in my viewing to make that decision yet. I also watch shows like NCIS, CSI, Monk, Bones on occasion when I catch them on tv. I kind of want to try my own hand at a crime story, with hopefully a twist that hasn't been taken with Vampires as a cop, referring to Forever Knight with that, she, the main character of this story, is NOTHING like Nicholas Knight. lol, so far from it, that it makes me laugh. I will admit it was a bit inspired by Dexter, which I sadly have only seen the first season, I need to watch more. Only slightly, just a small concept, but the story itself and everything will be nothing like Dexter. I want to be unique, I may get inspired by other things, but I will do my damnedest to spin it enough to be unique and not upset anyone.


I really hope to be known as a Vampire writer who has a good variety when it comes to my Vampires and my stories with them. I don't know if I want to be locked down as say a horror writer or a Romance novelist as just an example, I want to bounce around. I will always likely be categorized in the Sci-fi/Fantasy genre, that is sort of a given, but I want there to be enough..Spice.. to my stories that bookstores will have trouble finding the right section to place my books, or more my books will never been found next to each other. I mean, currently on my 'plate' so to say I have the workings of:

-Dreaming Reality which I am no sure what to describe it, its a...adventuring/travel story, probably more a time travel/dimension hoping story the more I think about it, with growth and self discovery, and the main character is a Vampire. Its about discovering the life she led, as Natalie was never suppose to be her life, which doesn't really phase her, she is too enthralled by traveling to other worlds and she is entangled with a dimension jellyfish named Estarial and through her is how she can travel to all these other worlds and discovered this other body that has been in a coma because its soul was ripped out and placed in body on earth.

-Of the Deep End which is a Vampire crime series. About a Vampire who works as a corner for the local police station, and through knowing what all the police look for when finding a killer, she is easily able to cover up after herself when she kills a mortal to feed. In this modern day and age, how else can a Vampire kill to live without being discovered?

-To Hell With It which is more on the fantasy magical side of Vampires, and will involve witchcraft, demons, set in a more medieval time/world-ish place. Or what I hope sounds medieval, I should probably do some more research on that. Which here is a link to the post where I posted the beginning of this story, tell me what you think so far? To Hell With It (sample)

-The Spying Moon which I admit, is inspired by the relationship of father and son between Shawn and Henry Spencer. Though just inspired, I don't have the whole idea worked out yet, but I will make a point to not rip of Psych, believe me. I don't want to make a copy of something, I want to be unique. But I just love the relationship between Henry and Shawn and it makes me want to write a story like that. So I got the idea for a son who was turned into a Vampire and is ashamed, tends to run away from his problems (similar to what Shawn did after high school), and really he just wants his fathers approval. Its guess its a typical situation of a child desperate for a parents approval, but with a Vampire toss in because that's what I write, Vampires.

-Immortal River which is about a Vampire couple who are centuries old and the shift from the 'good old days' where they could kill freely, and moves to a modern time, where there are laws set and Vampires went through a time when they 'came into the light' so to say, and where discriminated against. Then laws are placed, a truce is made, to protect both Vampires and mortals. Also likely to go in to the future, with a more Sci-fi feel.

-Eulogy of a Mortal Life which currently is far back on the back burner, the ideas are there, they are typed a bit, but its not....I have no desire to work on it right now, there is no inspiration or liking of the story right now, but that could change at anytime. But anyways its about a guy who moves far away from home, leaving his past behind him, to forget, and wanting to get away to a start fresh, a new beginning, and boy does he get a 'new beginning'.

-Floating Balvolynn Petals which is more on the darker side, way darker side. This is a Horror Vampire story, this is a story where I am letting my Mr. Horror side out without a leash, what I think of is written, no self censoring because its risky and it won't be for the shy faint of hearts.

-The Dreams we Weave Which I almost forgot about mostly because while its the story I have the most written on, its actually behind a lot. See it started out as just a fanfiction, a personal one for the hell of it, but now I have 40 pages, typed times new roman, single spaced, its over 20,000 words and I have become insanely attached to it, I already have the bare bones plot ideas for book 2 and 3. So while I have a lot written, I need to see if I can tweak it around so that its no longer a fanfiction. Which I hope I can do, but not sure if its possible. It just wouldn't have the same depth anymore, so I don't know if I will even try. I might just, take the plot ideas from it and write a completely different story. Who knows, its also on the far back burner.

Then I have miscellaneous little one shots, that I could expand on, but I am not working on them at this time, so those, The Dreams we Weave, and Eulogy of a Mortal Life, are not my real focus right now. I mean those little one shots, I just haven't look at in a while, which I do plan to set aside some time and glance back at those, they just don't have titles or enough to the story to summarize and explain at this point in time. Plus I have already talked enough with 8 stories, which please no one take...>.< I wanted to summarize them and get a little feedback on if they sound interesting, I know thats a risk, with posting stuff on the internet. Which is why I tried to keep the summary simple enough so that if someone tries to write a story based on the summary, it can't be the same, but enough info so you can get an idea of what its about.

I mean, that seems like a wide range of subcategory's to me, and I hope to keep up that bouncing around from topic it topic, so to say, with the 'spice' of Vampire's tossed into many categories. 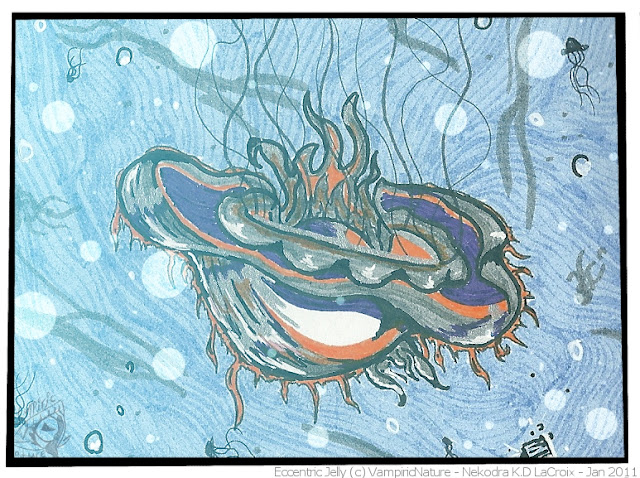 (off the topic of writing goals)

Well, I think I have yammered to you guys enough for today. The short story for today is the summaries to the novels/novellas I am working on. Its too early in the day to know if I will do today's WOTDS, I am working on some of my novels, so its not like yesterday were I didn't write anything, but if I do end up wanting to post today's WOTDS. I will just post two in my next update. ^_^ Sound fair?


Those side notes and then I am off to work more on my novels:

-Follow me on Twitter, because I will tweet every time I post on my blog and I will post a link.  Nekodra's Twitter and remember Sharing is Caring, retweet to your friends if they might enjoy this.
-
-If you have never seen Psych, and you love comedies or crime shows, I highly recommend it! Currently on a mid-season break and will return on Leap year, Feb. 29th 2012. So excited here is a Link to a trailer for the second half of season 6.
-
-Also if you have never seen Red Dwarf it’s a great British Sci-fi comedy, and a new season after many years will air September 2012 for Red Dwarf X. So excited they are currently filming, can’t wait!
- Please remember feedback, I can’t grow as a writer from silence.
-
-Also remember unless stated otherwise, these stories and drawings belong to me, I wrote/drew them, please respect that.


Posted by NekodraKDLaCroix at 11:58 AM