I am not Completely Ms. Fluffy Vampires

Alright, like I said yesterday, I cannot keep up with this Fluffy Vampire-ness, because as much as I can and do romanticize Vampires, that is not always the case. I cannot become know as Ms. Fluffy Vampires. I refuse, I may have a soft side, but I am a Horror fan and I need to indulge that side every now and again. This isn't as graphic as I could have written it, believe me the depths my mind sank to when creating this story, makes me shiver a little, but I didn't want to do too far down the Horror Rabbit Hole just yet, because honestly. <.<;; I have no idea who is reading this and I don't want to scare any young readers who may find this. Plus, well I don't know who would enjoy reading that, so I kept it a little tame. But that being said, there is blood and there is death. So if you are a major softy, and squeamish when it comes to blood, as example Mr. Burton 'Gus' Guster from Psych who was frozen after Shawn accidentally squirted blood at him (hilarious scene by the way, from the episode 'This Episode Sucks' current season which is 6 of Psych. I can only image what fun they may have had to probably try and get Dule' Hill to move or something, I wish they showed us bloopers from that scene.) this may not be the story for you. Just saying, and just warning. Death, Blood, Horror, Implied Rape. Only implied, don't worry. Like I said, regardless of what my mind came up with, I did keep it tame. 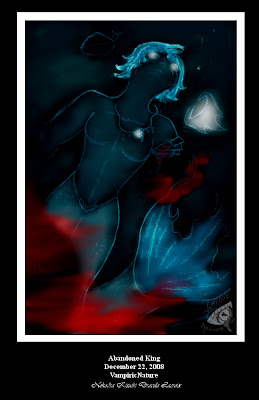 Why so Random, Hell?
By Nekodra K.D. LaCroix

I feel a little at war with myself, between my Fluffy and my Horror. But also, this isn't the initial story I came up with when debating what to write with horror in mind. I have another story I started, or more have down what I want to happen and now I just have to figure out how to write it. Once I realized that story wasn't going to be finished tonight, I opened a new document, and typed the first thing to come to mind, which ended up being someone's head getting smashed into a brick wall. Ouch. >.< It makes me head hurt thinking about it, and the story fell together from there. Just completely free written, no real story, no direction, just something scarey unfolding across the screen. I feel a little better now, Mr. Horror side has calmed a bit, and Ms. Fluffy is wanting to watch a bit of Psych to laugh and not think about what just happened, and instead have romanticized thoughts of Shawn and a midnight 'snack' >.< I worry about myself sometimes, but hey. ^_^ Its all good, but as much as I want to watch Psych, which I should squeeze in one episode, but I have been re-watching Red-Dwarf all day...well all day since I got up, which I won't say when, but just that my sleeping schedule is all wonky since I don't have a job and I don't have anything that I need to get up to do, and leave it at that.

I hope I haven't scared away any of the few readers I may have. Not all stories will be like this, don't worry. Ms. Fluffy will appear again, but do let me know if you don't mind Mr. Horror, in which case I can let him out of his cage more often. ^_^;;  'Kay?

So the side notes and then its back to Red Dwarf and Psych Fanfics:

-Follow me on Twitter, because I will tweet every time I post on my blog and I will post a link.  Nekodra's Twitter and remember Sharing is Caring, retweet to your friends if they might enjoy this.
-Have fun and toss me writing prompt, I would love the practice. I will credit you for tossing the prompt when I post the resulting story.
-If you have never seen Psych, and you love comedies or crime shows, I highly recommend it! You will laugh so much. Psych airs Wednesday on USA.
-Also if you have never seen Red Dwarf its a great British Sci-fi comedy, and a new season after many years with air September 2012 Red Dwarf X.
- Please remember feedback, I can’t grow as a writer from silence.
-Also remember unless stated otherwise, these stories and drawings belong to me, I wrote/drew them, please respect that.
~Nekodra K.D. LaCroix

Posted by NekodraKDLaCroix at 12:36 AM