A Dance of Flames

A Dance of Flames

Moving her hands in various ways through out this little scene of flames, it starts off with a fiery field of grass in a circle about a foot in front of her. Gently they move like a breeze is pushing pass them, then with an invisible gust of wind the flaming blades of grass swirls up and around to form the shape of a tiger. It’s nearly as tall as the 4’10 ft frame of the one that conjured it. The tiger is facing away from her, who it then turns to face, sitting down, and looking at its master waiting for a signal. Its head tilts to the side and his tail swished back and forth, and a twitch of his ear, which tossed small puffs of fire that flickered out instantly.

After a few moments, with a gesture of her small hands the tiger stands. Opening its mouth wide proceeding into a vicious roar. Flames burst forth and swirl, brushing passed and around the small frame creating a 4’10ft hour-glass shadow inside the flames. Her clothes and hair getting tossed about in the breeze of the fire; swirling up and above her, as the tiger fades from tail to snout as it uses its flame body to create a large bird.

With another wave of her hand and wave of the other, a tree of flames appears. The bird which flies around it a few times, flapping its wings, gracefully lands on the top of the tree. Moving its beak, opening it wide as though holding out the long note of a tune; little notes slowly move out of its beak. Unfolding its wings it moves to take off but is drawn back as if there were a drain between the bird and the tree. They swirl and distort, sucked into a tightly compacted egg shaped ball of flames.

A detailed red leaf then appears below the egg. Rolling off the leaf it lands on another, the previous leaf disappears; continuing this pattern till it reaches to roll onto the girl’s hand.

The egg then proceeds to appear to crack, the top half fall to the side of her hand, disappears into her palm. A snake, small at first, soon grows. Its head about the size of hers; bursts from the egg to coil around her feet and then spiraling crawls up her body, its head atop hers.

After a moment of the snake looking around, it lifts its head, opening its jaw as though to attack and bite, vibrantly it bursts into millions of blazing petals; gently they float to the ground.

With many petals still in the air, she bows her head and the rest of the fiery petals swirl up and absorb themselves into her body. After they have all disappeared, she lifts her head back up.

Nekodra’s cheeks redden like the back of her short red hair tipped dark; one of her long black bangs falls to cover one of her eyes. Bouncing lightly on her toes she walks off the stage, her long black jacket fluttered out behind her, with a small glimpse of a fluffy jet black tail. Sitting down on a nearby bench, lightly tugging at her pants she pulls out a blood lollipop and proceeds to unwrap it and pop it into her mouth, her tail wrapping around and onto her lap. Smiling, she enjoys the rest of the contest, eagerly waiting to see other competitors beautiful acts. 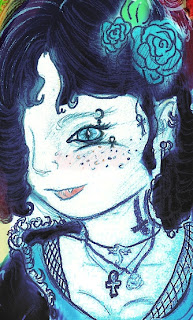 Page of other WOTDS
Page of other Short Stories
Afterword
This story was written back -let’s see- I believe it was 10th grade. So 2005. For little competition with Oc’s with some friends. The premise was a festival and there was a contest between elementals to do performance incorporating their element into the dance. My little Nekodra won. And yes, Nekodra was born a cat demon, and later was turned into a Vampire. She used to always keep her tail out, but doesn’t anymore, she prefers to stay in a completely humanoid form. But she has a soft spot for fluffy and can occasionally be found secretly hugging or stroking her own tail.
I wonder, does this story paint the picture I want it to? I have this whole visual video in my head of how this performance looks, and I wonder do I describe it well enough that those who aren’t in my head, see a similar image in their mind of this fiery performance?

Just a few after thoughts:
-Follow me on Twitter. I will tweet every time I post on my blog and I will post a link. Nekodra's Twitter
-Have fun and toss me writing prompt. I would love the practice. I will credit you for tossing the prompt when I post the resulting story.
-If you have never seen Psych and you love comedies or crime shows. I highly recommend it! Psych airs on USA on Wednesdays.
- Please remember feedback, I can’t grow as a writer from silence. I also would just love to talk.
-Also remember unless stated otherwise, these stories and drawings belong to me, I wrote/drew them, please respect that.

Posted by NekodraKDLaCroix at 4:27 PM