Oh I am so excited! I feel really egotistical, but I think my story has really taken a turn for the awesome! *bounces around* Here is the current standing Word count from the last few days:


I am really proud of myself with the progress on this so far; almost 15,000 words! Half of that is partly written scenes with notes so I don't forget the ideas. I should be able to reach 40,000 no problem at this rate!


I also have to thank my roommate Mino for some ideas that really snowballed in my head. I have now three new characters. They are roommates in a house they own. They all go to the same college as Ember. One is a mad scientist who almost has her Doctorate.  One comes from a family of Slayers and the other is a hacker. So many new Shenanigan possibilities now! I am so hyper excited that I am jittery. I have jitters from this whole new avenue of ideas that came just from a my roommate asking if there could be a character based of her who is a Slayer. Then we agreed my other friend Jet needs to be a mad scientist in my story. Then there should also be a Hacker, a hacker would be useful.


Then -BAM- all these new ideas start rolling it. I don't want to say anything more then that. I don't want spoilers. Buts its really coming along. So many possibilities! This might end up having to be a series of books. In fact, because of the way I want to write it; where each chapter is like its own episode. It more then likely -if I can get enough ideas for chapters- could very well end up a series. 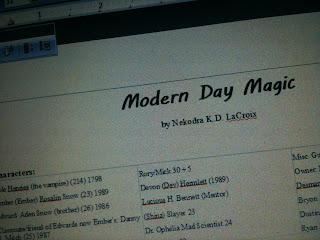 Did I mention how excited and proud I am?! I really want to post the story. I really want to share it, but I have to stay tight lipped from here on out. I can only post my word count and very very vague descriptions. But I just had to say something. I also had to say I am really proud of myself, writing and working on it every day. I am keeping track of my word count to be sure and to encourage myself.


I also just want to give thanks to Travis Thrasher once again for his 101 Writing Tips. I haven't read too many writing tip books, but one is amazing. Truly. I highly recommend it and I am only up to tip #32 and I love this book. It has given me so many hopeful tips, its given me inspiration, and its reassured me in my writing, that I can do this.


I have started re-watching Doctor who, beginning with 9th Doctor. Which is not only great for background amusement for my periodic breaks while writing, but also very helpful. I am using it to take notes of British terms to better Ember's British vocabulary, because all her top favorite shows are British. And as noted in that first chapter, she has a bad habit of picking up those words. Besides in all honestly, I love British terms. I really do. I love British accents. They make me swoon. I should do some research beside just using Doctor Who. There has to be a website somewhere on British terms. I will make a note of that to myself to look up and please by all means if you know of something that would help, don't keep it to yourself. ^_^

Oh and how can I forget. Congratulations to Matt Smith and  Karen Gillan! For there awards at the National TV Awards!


Also I want to share a quote that Neil Gaiman retweeted over twitter, that was posted by Sherman Alexie: 'Great art is the result if eccentric, individual passions, not test screenings, market research, and crowd sourcing.'


That quote hits home right now because I had a small argument with my boyfriend yesterday about the opening line in my story:


[ “No fucking way, your a goddamn Vampire!” Ember covered her mouth in shock of her own outburst and at swearing to a stranger.That wasn't like her, well talking out loud in general really wasn't like her. Ember was more an observer and its not like swearing was out of the ordinary, it was just rare and certainly not around new people. Who is a Vampire no less.] -Modern Day Magic by Nekodra K.D. LaCroix


He was saying how 'if I want to sell my book, I have to change the swearing in the opening line; it will put people off. Swearing puts people of.' I shrugged and told him that if they are put off by two little words that are tabooed, which currently out of my almost 15,000 words are the only actual swear words, its their loss and probably not right for my book to began with. I plan for it to be considered a humorous horror book. If they are that against the words Goddamn or Fucking, to where why won't read any farther, they probably won't like some of the gruesome scenes I have planned. Its my book and I personally like the -BAM- in your face opening line. I think it fits and its how I want it start. Plan and simple. He thinks my book won't sell and I would loose out on potential readers. I said I don't care about being the next Harry Potter. I just want to enjoy writing and if I can make some money off something I am having so much fun working on, that is a bonus. I want to share it. If it can inspire just one person, somehow with my book, I would consider it a success.


What are you thoughts on the opening line?

Here are the side notes, then I need to go eat something, then its back to watching Doctor who and working on Modern Day Magic:


-- Please Comment, I would love to talk!
Also any tips, suggestions would be loved.
You can also email me at Nekodra-blog@hotmail.com
-
--Follow me on Twitter. I will tweet every time I post on my blog. Nekodra's Twitter and remember Sharing is Caring: re-tweet to your friends if they might enjoy this.
-
--If you have never seen Psych and you love comedies or crime shows, I highly recommend it! Currently on a mid-season break and will return on Leap year, Feb. 29th 2012.
So excited here is a Link to a trailer for the second half of season 6. Here is the new promo.
-
--Also remember unless stated otherwise, these stories and drawings belong to me, I wrote/drew them, please respect that.

Posted by NekodraKDLaCroix at 2:52 PM