Quick look at the projects I am working on. 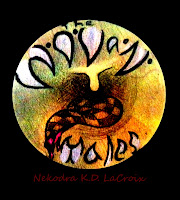 WOVaN:
Collection of short stories on the topic of The Wonders of Vampiric Nature.

--Likely more WOVaN to be written over the years.

The Experimental Sons:
A Mad Scientist, a trio of Vampires and a few zombies thrown in- how is this not a mixture of fun? I am certainly having fun writing it.

Luminescence in the Darkness:
A short story being written to submit to Asimov Magazine.
(This story is completed, story wise. Now needs to be majorly edited and a little restructuring.)

As the title says. This story is actually a movie script. I have almost all the dialogue written. I am writing it first as a script, then I will turn it into a novel.
Part 1: Script nearly done, then it will be novelized
Part 2: still rather iffy
Parts 3 & 4: still majorly just concept

Dreaming Reality:
^_~ Will be Nekodra K.D. LaCroix's story. One day it will be written down.

???:
There are a few ideas in the works, but its too early to say anything.