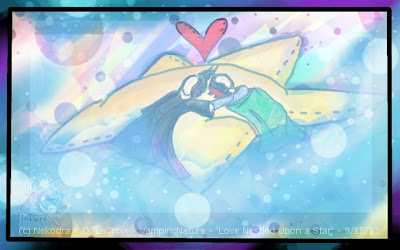 Its February! February means Psych! *Bounces* I cam almost taste the pineapplicious delight of Psych's return.
3 days till my dad gets back from Africa, 12 days till V-day, 14 days till my boyfriends B-day. 15 days till The Secret World of Arrietty. And only 27 more days till Psych!! Also 2 Months till Sakura-con! and 7ish months till Red Dwarf X >.< But anyways enough random-ish counting down. It is also the month where you are walking in a store and see out of the corner of your eye an aisle of pink. Nothing but pink o.o everything -pink- Its frightening. lol.


I actually haven't done too much writing the last few days. Sorta. Till today, o.o I did a lot of writing today, so yay for that. The problem I am having is- I want to write things that's too far into the book and they involve things I can't make a decisions on. >.<# Well having a difficult time deciding. Like this Detective, I can't even really finish chapter 2 till I make a decision about him and what he knows, or rather if he knows yet or finds out later. Gah. I would skip it and move on to other parts of chapter 2, but the problem is that it vastly changes where the conversation goes; its at a fork and the turn depends on what he knows. x.x;; Why can't I decide?!


I have done more on later parts, bit by bit. I keep feeling like Cole is too nice and its slightly driving me up the wall, so I worked a bit on a gruesome scene with a insane vampire to get that need out a bit and when I am done typing this post I plan to go work on that a bit more. I like how its coming along. *bounces* I had a small break through on that chapter. With him I kind of want to show Cole is actually a little of an odd ball so to say. You first meet Cole and he is nice, he is a gentleman, and-- I really shouldn't say too much. This book is going to be humorous, but I also want it to have its horror moments and it will. Lets leave it at that, Prepare for some gruesome scenes. I keep wanting to share and I can't. >.<#


I want people to read it and feel the shock they should, be surprised and if I say too much it won't be a shock. I have to keep quiet about details...*Places hand over mouth*


Also part of the reason I haven't written as much as I probably should have is because I recently got my hands on Disgaea 2 and its eating me. I played Disgaea one, a bit before it was stolen and I enjoyed the game. The perks of having a boyfriend who works at Gamestop is when he isn't checking out a game, I can have him check one out for me. I saw they had Disgaea 2 and though I never finished one, I picked it up anyways. <.< I don't want to give it back. lol. So his next paycheck he said he would buy it for me. ^_^ Yay! My Mage is a boss <.< I use her so much she is about 10 levels above everyone else lol. So much fun, but I am forcing myself to take a break and work on Modern Day Magic. I know myself and if I go too long without working on it, then it will slip into forgotten land. I refuse to let that happen. I want to finish this. I am really excited about it. So here I am taking a break from Disgaea <.< and I end up working on a post...heh.. But I did write before I started this and I keep pausing this to poke back at Modern Day Magic. So I am still working. ^_^;;


I have also gone through the various 'scenes' I have partly written out and have some of them actually organized now. Now that some of them are next to other parts that go with them, I am starting to fill in some gaps.


So many ideas. >.< While nice, is slightly troublesome, like I said I keep wanting to work on things that I can't work on yet because I need to flush out characters or make a decision on something. In some cases its just too early to decide. Some ideas are coming too early and they belong too far into the book that I can't even really write them yet because too much of it hinders on things that haven't happened. x.x I have hit a bit of a bump in the writing road, I will make it over it. Eventually...

Though really, I shouldn't be too hard on myself. Its the day two of month two of a new year and I am halfway to what qualifies as a novel. I started Modern Day Magic as a random little short on Christmas eve, not expecting it to go this far. I made a new years resolution a few weeks before new years, saying by next year I want to have a story ready for publishing, finished enough to figure out what to do about an editor. Beginning of month 2 of 2012 and I have a story that I have so many ideas for it most likely will end up a series. A story that's at the half-way mark of qualifying as a novel. I should be damn proud of myself so far. So I had a few days where I didn't really write, I also had days were I wrote over 1,000 words. I can't expect to do amazing everyday, just so long as I do something. Low writing days will happen, so long as I balance that will good days. So long as I am working on it period; all is well. I have over 19,500 words to a story, that's awesome!


o.o I should be damn proud and fine with what I have done, it 13 days, barely two weeks, I have written over 10,000 words. That's not bad at all. And really its not completely about how many words I add to the story, but that I get ideas for the story and such. That it develops as a story. I may not have written much in the ways of adding words that last few days, but I organized some scenes into there proper places. And by doing that, I did ended up writing quite a bit today. I also took from some of older writings and converted them to fit into the story which helped to add new ideas for the story.

JadedDN: Yeah, no way will it be forks. >.< Either I will make up a town, or I will place it 50 or so years in the future and pick a town and shape it how I want, because its 50 years in the future, they can't argue with me on how the town looks. <.<;; Idk what I will actually do, but I know it won't be Forks. lol.

Anyways, here are the side notes and I am going to get at least a little more written for Modern Day Magic, I want to breech the 20,000 word mark and then back to Disgaea 2:


-- Please Comment, I would love to talk!
Also any tips, suggestions would be loved.
You can also email me at Nekodra-blog@hotmail.com
-
--Follow me on Twitter. I will tweet every time I post on my blog. Nekodra's Twitter
-
--If you have never seen Psych and you love comedies or crime shows, I highly recommend it! Currently on a mid-season break and will return on Leap year, Feb. 29th 2012! 27 more days!
So excited here is a Link to a trailer for the second half of season 6. Here is the new promo. I am so excited, can't wait for 2.29.12!

-- Please remember, Modern Day Magic belongs to me, thank you.