To Dreams, Guts and Bucketlist 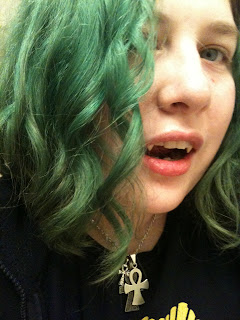 What do you want to be when you grow up?
I wanna be a vampire!--- in a movie

I was thinking today about what I used to always say in school when your teacher asks, what do you want to be when you grow up? I traded off between Actress and Writer. I technically succeeded in one, Writing. I did self publish on Amazon, WOVaN: Short Stories vol.1. Its only been out for a little over a month and I know who bought 5 of the 6 copies sold. That is okay, woot there is someone out there who I don't know that bought a copy, that is amazing to me. But what always still sits in the back of my mind, acting. Its not that I want to be a big star or anything, I don't really, I just want to be there. Just a small role, just to experience it all and have fun.

I was in a play in middle school, Annie. It was so much fun. I was only a orphan and had like two lines, not counting the musical numbers of course. I didn't care, it was fun. Insanely fun. I also did a video for a class in high school, where I got to play Hades. It was awesome, which I have shown a clip of and that is all that remains of the fun we had. We gave a copy to the teacher, who when I got a hold of him last I heard he wasn't teaching anymore and didn't know where those boxes are that has all that stuff. He said he'd look, but I never heard back from him, and what was on a friends computer was lost to the ether. But for this single clip of outtakes. But that was fun.

Here is the clip again if your curious, lol. It really is just a silly short clip of outtakes. I really wish the whole video hadn't been lost. There are a few other outtakes posted on youtube too.

I have to ask myself why? Why can't I get the guts to go out and pursue this other dream? Its not that I want to be the star. I just want to be there. I am more then content to be an extra, a small role who more in the background.

One: I don't think I would audition well I get so nervous so easily.
Two: to be honest I don't know how the hell to go about looking for chances to just play an extra in a movie. lol.

Well, part of my reason for writing. A little secret to what really drives me to write, the hopes that maybe, just maybe someday down the road someone- somewhere will want to turn one of my books into a movie. Maybe I could convince them to let me play one of the minor vampire roles.

I will keep my fingers crossed.

1. Play a Vampire in a movie/show
2. Travel to just any and everywhere I get the chance to
3. Go see SNL live (meeting the cast would be an awesome bonus, lol)
4. Never stop dreaming
5. Keep writing and publishing my stories
6. Play an extra in a movie
7. Don't give up

I suppose now I do have an official bucket list, though can I do that? Put some like never stop dreaming and never give up? Eh, who cares its my bucket list right? That feels right, that sounds right for me. Those are my life goals.

On some other notes, I have been working on AVRC which is just a short easily way to say A Vampire Romantic Comedy, which I have a possible better name to call it other then by its genre, but still thinking about it. For now I will just stick with the nickname AVRC.

Though I am taking a break from working on it today, because I am stressing myself out a little. I mentioned earlier on twitter that the more I work on AVRC, the more disappointed I get in the lack of comedy that I want there to be. I love comedy, I love to laugh- I suck at cracking a joke. I am the Laughter not the Comedian. I wasn't joking when I also stated I wish to collaborate with Seth Meyers. He is the head writer at SNL and from interviews I have seen, its been said he is fun to collaborate with. I want AVRC to be a movie on day and there is a character I wrote for Seth in AvRC. How awesome would that be to collaborate the script with him and then also work with him should it actually be made into a movie? I also mention or Rick Gualtieri, because he also really funny. I absolutely love Bill the Vampire and the rest of the books in the series (eagerly waiting for the next). I am sure I got weird looks whenever I would read in public because I couldn't help but burst out laughing, and I was at least chuckling quietly to myself on every page. 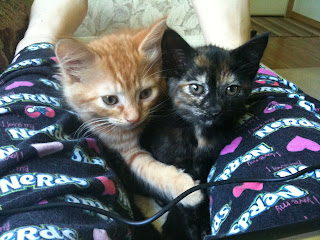 Also pets, I have gotten some new pets since the last time I really made any actual posts. So here are some adorable pictures to share of my two kittens and Chinese water dragon.

My kittens were born May 7th 2012. There is Mellie Lane and JarJar Binks, yes as in Star Wars. He is orange and does not shut up, always talking. Seemed to fit, lol.

They used to be so small, they already are pretty big now, just 8 months old and they are so big compared to how small they were at just a few months. Though Mellie is still pretty small and quite a trouble maker. For those who know SNL, we have gotten to calling her Gilly when scolding her. As in Gilly from SNL played by Kristen Wiig. lol, it amuses us.
My Chinese water dragon, birth is unknown other then a few months, so we decided to just go with Oct. 31st just because. His/her (won't know till about a year old) name is Jade. We have just gotten to referring to Jade as male. He is pretty cute and currently small, but he could grow to be 2-3 ft! In some cases Chinese Water Dragons can get to be 4ft! Crazy. 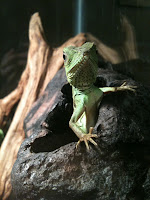 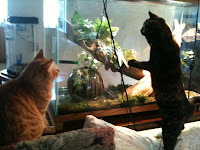 Its so funny, Mellie is obsessed with watching Jade, determined to try and get in the tank. She hasn't been successful. Its so funny, she paces around the tank, looks at it from every angle. Mellie is the hunter of the two. Which Mellie and JarJar are brother and sister. If I spot a spider and point it out to Mellie, she will eat if for me. lol.

Movies:
Well if you follow me on twitter @Nekodra then you know I have been all over the movie I Kissed a Vampire. Its a vampire musical! How awesome is that? I saw that and I thought I have to see this and I loved it. Absolutely loved it. I now have the soundtrack as well. If you enjoy Vampires and Musicals, you should check it out. Its on Netflix, iTunes and I am sure other places.

I love that now I have music to listen to that is about vampires. I love it! My top favorite songs would have to be 'Little Peck' and 'Just a Drop'. The movie is a bit silly which is what makes it awesome and the music is so fun. Dylan and Sarah are an adorable couple, I love it. I don't want to spoil it, so I won't say too much more, but I loved it. All of it. It has joined my list of top favorite vampire movies, next to Interview with a Vampire, Cirque Du Freak, Fright Night 2012, Van Helsing,and Dark Shadows. I think that is it for my top favorite ones, and I have to say I almost want to put it as my number one favorite vampire movie, but I feel like I am betraying those I have known for years like Interview with a Vampire, but I don't know. I really loved I Kissed a Vampire.

Okay, think I have ramble on long enough. If you enjoy vampires, please take a look at my collection of vampire short stories on amazon. WOVaN: Short Stories vol.1

Posted by NekodraKDLaCroix at 3:55 PM