From a Hiatus of Laughter


Yeah, I appeared to disappear for a while, didn't I? Distracted mostly. I have been working so much on A Vampire Romantic Comedy, book one is actually nearly done dialogue/script wise, yay! Nearly time to turn it into the novel. I am excited and I hope its as good as I think it is, and yes you read right, I did say book one. Though really, book one and book two might still just end up as one book the more I look at it. Actually yeah, I think it it will end up still one story. So scratch that, book one and two are back to one book. Probably a part one and part two sort of thing. Mostly because I like the title ideas, A Vampire Romantic Comedy In This Beginning and A Vampire Romantic Comedy In Hell. It amuses me, I want to break it up into two technically separate stories just to use those titles. lol.

Oh and for those curious, or something, I did make some adjustments and additions to the Dream Cast. Here is a lovely picture reference to how the main character list looks like and my dream cast of who I picture playing these characters should I ever end up lucky enough to see this story turned into a movie/ pretty much who I picture the characters as while I write and think about the story. By this point its so hard to picture the characters played by anyone else just because of how much time I have spent visualizing this story as I write it: 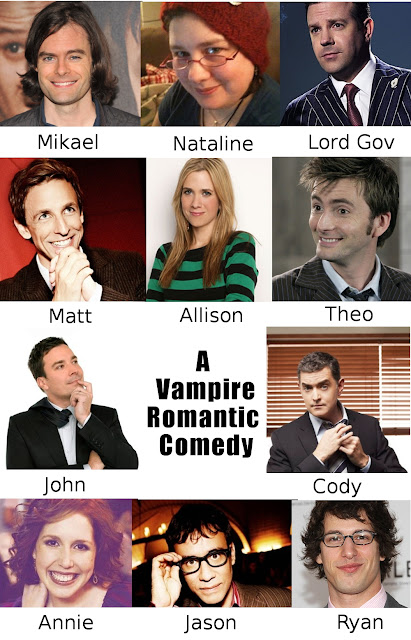 Shhh, yes I have cast myself as Nataline >.> Let me have my dreams, this is a dream cast list after all. Annie and Ryan, I cast as such because, though they are more minor characters compared to the others, I pictured the characters looking similar to them and then when I was watching SNL I realized that they were perfect for those two characters. So while say Mikael, Matt, Theo and John where designed to fit the looks of Bill, Seth, David and Jimmy; Annie and Ryan were actually design first and those two just seem perfect for the part. Jason originally was a toss up between being Liev Schreiber and Fred Armisen and I finally made a decision on Fred. I also finally picked someone for Allison, for the longest time I had no one in mind for the main female lead, I thought why not stick with the SNL theme of most of the characters being played by current or past SNL actors and once I thought that, well I had to go with Kristen Wiig. She is an amazing and dynamic actress. All the actors/actress on this list are amazing!

I still will keep my fingers crossed as I write this story, that should this be made into a movie that all of them will want to play their characters. In case you don't know who these people here are their names and links are to their IMDB.com page:

But yeah, that is the list how it currently stands. Just felt like sharing so you can picture it properly when I show a glimpse of some of the dialogue in this post. A sample if you will. But what to show without showing too much? hmmmm... Gah, I am having a hard time finding a good quote that is interesting but doesn't give too much away....

Synopsis:
Two male vampires and one mortal girl, equals love triangle.
An evil vampire master back from the hell.
What more do you need, what more do you want?
Shenanigans? Comedy? Don't worry, its all there.
Did I mention a vigilantly vampire hunter?
This isn't your typical romantic comedy.
--

[Nat]
To be honest, not sure if its sunk in or it I am dreaming. Possibly hallucinating. I know I didn't pass out, I never drink enough to pass out, I nurse my drinks... Vampire, really?
[ Mikael]
Yes.
[Nat]
Sunlight?
[ Mikael]
Think of yourself as ginger. Your going to get more pale, so those faint freckles you got are going to stand out more, and your just sunburn easier. Wear layers, walk in the shade when possible, and don't try to sun tan. It won't be pretty, all crispy and depending on the severity it can take a while to heal, can end it death.

[Mikael]
Comes into the room, lips locked with another guy.
Pushes him to his knees. Waving Nataline over.
[Nat]
Walks over
John?
[Mikael]
Don't name him, just feed.
[Nat]
Fuck you, that's my brother!
Dawns on her
Eww, you kissed my brother!
[Mikael]
I care why? You were hungry, I snatched a snack. Don't complain.
--
[Matt]
Theo can come too.
[Theo]
Wait, what is going on?
[Matt]
The three of us are going on a Tri-date
[Alli]
Not a date
[Matt]
A Trial date: that is what the tri completely stood for, I swear, not Trio date, but trail date.
[Alli]
Sure, but still has the word date in it.
[Matt]
Fine, the three of us are going to a movie together. Snuggling close in a dark theatre, Alli snug betwe-
[Alli]
Matt!
--

Okay, that is all. I think those are okay to show, they are short and keep out anything that could be saying too much too soon, but perhaps are interesting enough to make you wonder what is going on? Right? Maybe? Perhaps? When its published you will totally buy it now, because your curiosity is peaked, right? Help build a massive fan base so someone with money it tempted to fund making this into a movie, right? Right? - okay, I am done, I swear. ^_^ Just having fun, promise. Though I do hope others enjoy this story and much as I enjoy it.

So, like I have said, I an writing this as a script first, which is nearly done and then I shall begin the novelization of it. Well, technically I have written some of it as a novel, the first few scenes, but once the script is fully done I was then of course actually focus on turning it into a novel. ^_^ I am excited.

Hmm, its been over a month since my last post, do I have anything else to talk about? I am currently watching a Psych Marathon on Ion which is sweet. Season 7, gods I can't wait for new episodes. Please let Henry be okay! I am excited and nervous! I also hope they were able to do that Psych Musical episode.

Doctor who is due to start soonish, I believe. I need to found out if there is a set date or not. I am also excited but nervous. I am going to cry so much when Amy and Rory leave! I know it. I have seen trailers for it, and I am excited, just not going to think about the sadness. If I heard right there will be another Neil Gaimen episode, yay. Loved the Doctors Wife episode!

Woot, shows will be starting up again soon. Yay!

I wonder when SNL starts? Man, I would love to see it live, one day I hope. But it requires getting the money to fly down from Washington to New York, so hotel fare as well, and I guess from what I gathered from the NBC SNL website you can't buy tickets, but you enter a lottery?... huh? Does that mean I pay for it if I win or are the tickets free? There wasn't a price for tickets? There is also standby you can show up at 7am and possibly get tickets..? I am tempted to enter the lottery, in fact I may enter anyways and try my luck, I just cross my fingers is later in the season that way if I somehow win tickets for, I can save up for the flight and such. But perhaps if I don't win, I could save up and later in the season fly down and spend a week or so in New York and see about stand by, but then if I can't get tickets then I can spend a week in New York and make it a vacation so that its not a waste if I can't get tickets. Lol, perhaps I will fly down on a Friday and leave on a Sunday so I have two chances for standby. Sounds solid, right?

Still for a moment on the subject of SNL, I have watch so much SNL lately, lol. I can't get enough, while I am looking forward to new episodes, I may have said this before but it will be weird not to have Kristen Wiig and Andy Samberg, but at least Seth will still be there. I guess he guest hosted or something on a show called 'The Today Show' or I don't know, but I guess rumors start flying that he would leave SNL and co-host that show permittedly. but he squashed that rumor pretty hard, saying how much he loves working on SNL and its an election year, he wasn't going to miss out on that. When I read that, I was pretty stoked and I laughed. Weekend Update with Seth Meyers is one of my most favorite parts of SNL, it will be a very sad day if/when Seth Meyers leaves SNL. I Just hope he keeps enjoying working there for a very long time. ^_~

Okay, I have yammered on enough. I have shown I am still alive and still working on my stories. Now enough chitchat and back to working on A Vampire Romantic Comedy.

Have a good day, while you all enjoy the icky sunny warmth, I am going to huddle in the shade of the indoors with the A/C and write about Vampires. Sexy Bill Hader, Seth Meyers, David Tennant and Jason Sudeikis Vampires.Yummy. And continue to watch this Psych Marathon until it ends and then probably more SNL.

Posted by NekodraKDLaCroix at 6:15 PM