Jellyfish Doodles and WOTDS Oh my! Time Lapse Videos:
I have become enchanted by the discovery of watching time lapse videos of drawings. I have started watching tons of them and I plan to watch more. In this enchantment I thought 'why not?' and I made a few myself- which I recently put up on my YouTube account, which had been blank until then- I mean aside from favorites and now a list of some of my favorite time lapse videos of the ones I have watched so far.

I don't know, I personally love watching other people draw, my favorite is one of my friends, but anyways in case you too enjoy watching others draw here are my time lapse videos. It think they look cool and the pictures turned out decently. ^_^ Enjoy?


Whee, some Radioactive Jellyfish, at least that is what I am calling this piece since that is sorta what it looks like. This took about 40 minutes to draw. Jellyfish and Checkers, they are what I draw best.

After using a Katamari song for the background on the first video, well I wanted to draw something Katamari-ish. So here is a Katamari rolling up some Jellyfish. This took about 30 minutes to drawing.

There is another one, but for some reason its not being listed under my videos. idk. It is a Pinkie Pie Jellyfish that I did for a friend for her birthday. Yes, as in My Little Ponies. ^_^; Can't draw ponies so Jellyfish instead, jellyfish are funner and easier to draw for me anyways. She really likes it which makes me happy.

WOTDS:
Once again, I have been a bit on the lazy side/lack of ideas for how to finish a few of the stories in WOVaN 2, so I need to get myself back on the train of writing by making myself do a WOTDS.

She bound up the stone steps and burst through the front door. “Danny!” She cried out excitedly, eyes scanning the room.
Mercury’s sudden appearance with the slamming of the door and unruly loud voice nearly sent Markus raging without mercy, but he held back and eyed the child. “Mercury!” He scolded with a disapproving scowl. “Control yourself.” Markus overbearing and ancient aura pushed at Mercury’s young and untamed one. His presence made her feel suffocated, even after 50 years she couldn’t get used to it. She was certain he only put up with her for Danny’s sake and should Danny ever fall out of love, Mercury was certain she’d wake with a stake in her heart.
Mercury’s violet eyes widened as he stood slow steps towards her. “M-Markus I-I..” She fumbled over her words.
“SIT!” He commanded and she did, the nearest chair found itself with a cowering small frame of Mercury’s body. “Why the commotion, Mercury?”
“Markus, forgive me. I was simply so delighted, it was foolish…” Mercury kept her eyes down cast and to the side as she spoke.
“Don’t give me excuses, tell me what it is.”
She bite her lip and tried to look up at Markus, but chickened out. “Danny- Danny called and said he had a special gift for me an-and I was just excited to spend time with him—I mean you to recently came back from your trip an-and you have been—“
“--Keeping him busy with studies.” Markus
Mercury winced, and then nodded.
“You have missed him.” Markus added.
She nodded again.
“Very well, he is in his room.”
Mercury relaxed cautiously and smiled up at Markus. “Thank you, sire.”
“But keep your voice down.”
“Yes, sire. Thank you, sire.” She scurried past him and up the stairs with a blur.
Jason walked in from the other room to stand beside Markus, hugging his arm. “You should stop scaring the poor dear, Markus-love.”
Markus broke into a wide grin and kissed Jason on the cheek. “It is just so fun, I am merely enjoying it while I can.”
Jason shook his head with a laugh, “You’re horrible.”
“Yet you love me.” Markus kissed him on the lips.
“Always.” Jason answered as their lips parted.
-End 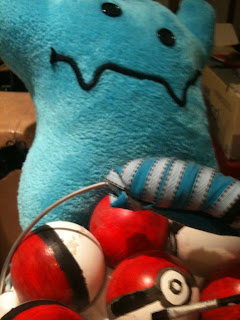 Is coming up here in a month. I am excited, so much fun! I love the atmosphere of Sakura-con and I look forward to spending time with friends I haven't seen in a while. Yay!

I made myself a Ditto a while ago to have and because its perfect for my Blue Pokemon Breeder cosplay. He is soooooo fuzzy, I love it! I could huggle him all day and rub my cheek against the fuzziness of awesome. Yes, I did give him fangs. Lol, of course I did. Also he/she wants to hug you and make eggs, at least that was the attempt I was going for, for his look- His arms up and asking for a hug, smiling.

I was touching up my balls when I took this picture. Which I also made and painted myself. My roommates helped with the idea and the sanding and prepping the balls, but I hand painted our pokeballs.

I believe that is it for today, short and sweet. Some art with video, a short little story and a little Sakura-con.

Enjoy and have a good night!