All the Jellyfish Creativity 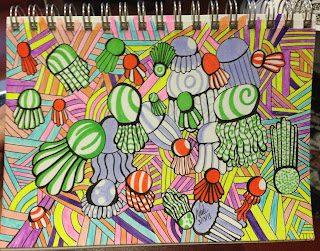 Drawing and Videos
I have been told lately that I should consider seeing my works like at a farmers market sort of thing- but to be honest I am not really sure how to go about doing that. Nor am I sure anyone would be interested in my works- But its nice to hear that people thing they are good enough that someone may want to buy them.

I have some more Time Lapse videos in case you want to watch them. I enjoy watching drawing time lapse videos and its fun to make one- really interesting to go back and watch yourself draw something. Fun.
One: I felt like combing checkers and Jellyfish, it turned out amusing and lead to some better works later. There is also another one 'Blooming Colors' which I am rather proud of and I have made various variant works like it. They take about 2-3 hours, but its a lot of fun.  The other time lapse videos were more quick works taking only about 40-50 minutes to draw, but 'Blooming Colors' I more took my time with. Along with the the one titled 'Inner Jellyfish'.

This is the Purple Checkered Jellyfish one, just a quickish silly like doodling.

This is the Blooming colors one. A lot of work and more 'serious' then just the other odd doodles. I am rather proud of it. I like this style a lot.

And here is 'Inner Jellfish' a crazy fun doodle. Its set to two songs from I Kissed a Vampire because that is the soundtrack I was listening to while I was drawing it.

Writing
Once again, I am still not in much of a writing mood. I have very much been majoring drawing- so I 'made' myself sit down and work on a few stories. I started on The Experimental Sons and then I focused on WOVaN 2. Not much work as I have done in the past, but at least its something. Bit by bit, I will get them done. 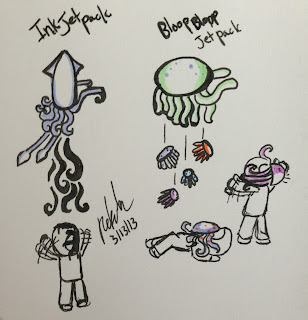 On a cool side note:
I was on twitter/facebook and saw a post by Halfbrick Studios showing someones designs for Jetpack ideas for one of their games Jetpack Joyride (Which is a rather fun game if you haven't played it.) Seeing those made me think, hmmm, what would be another cool Jetpack design and naturally I ended up drawing a Jellyfish and Squid jetpacks- which amused me and so I shared to the Halfbrick twitter account- well the one who runs the accounts loved the  designs- I don't know if they'd end up making those for the game, but that would be so awesome if they did. But they did share it on their Facebook and Twitter accounts, and there were fans that loved that idea, so that is really cool.


Sakura-con:
I think I mentioned this in the previous post but Sakura-con, yay! I leave for Seattle tomorrow, picking up badges and then probably just hanging out at the hotel room. Here is a silly little Sakura-con Jellyfish time lapse I just sorta did in excitement I guess. Enjoy and perhaps I will update with Sakura-con pictures and the like afterwords.